On Thursday April 5, 2018 at a press briefing by organizers of the Jamaican Grace Jerk Festival  saw organizers, media, sponsors and guests, gather at the Embassy of Jamaica in Washington DC, where broadcasting was made public, for this the third anniversary year of the Jamaican Grace Jerk Festival which is slated for Robert F. Kennedy Stadium Lot 6 B on Sunday June 18th  2018.

National Caribbean American Heritage is celebrated in the month of June which add to why promoters have taken the opportunity to host the festival in that respected time of the year. Jamaican renowned band Third World will headline the event among other cultural performers which includes Divine Divas and Dancers, New Kingston, Xyclone, Sounds of Culture, Malcolm X Drummers, storyteller Joelle Wright and Ricky Platinum. Radio broadcaster legendary Tony Carr, Michael Campbell and Mr Ragashanti  are scheduled to handle the hosting  responsibilities of the festival. 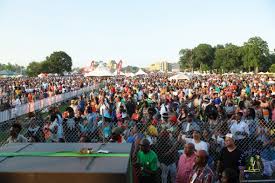 Patrons can expect mouth watering food that will be available by chef Irie, DC’s chef Jumoke Jackson and other top ranking chefs that will be displaying their creative culinary art at the event.