The subtle interplay of fire and water is hard to ignore at the remote Windsor Mineral Spring. The small area of the spring, about the size of a large jacuzzi, is called “Fire Water,” as it can actually make fire. This unusual activity is believed to be caused by a high concentration of sulfur in the water. Residents of Winsor in St. Ann have told many stories about the healing and rejuvenating effects of the water. The pond is used by many Jamaicans and even others from different part of the world for healing, which in century used by slaves from the surrounding plantations. Windsor Mineral Spring is over 100 years old. 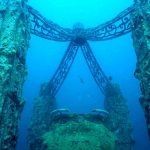 Port Royal  located at the mouth of the Kingston harbor, once had the reputation of being the richest and wickedest city in the world. The massive earthquake of 1692 that hit Port Royal destroyed most of the city, even sending parts of it into the sea. Most of the remains of the 17th-century city lie under up to 40 feet of water. Many archaeologists and geographic societies have sent divers underwater, exploring the sunken city to discovery the misery of the sunken city. 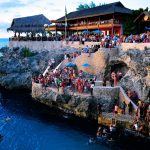 Rick’s Cafa is one of the most popular hot spots in Jamaica. The restaurant and bar, located in Negril, serves amazing liquor and food, of course, but most people go there to jump off the 35-foot high cliff and to view the beautiful Negril sunset that peaks over the naturally formed cliffs, parting and celebration. 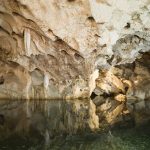 Named for the green algae that cover its walls, the Green Grotto Cave is one of the most prominent tourist attractions in St. Ann. Touring the cave, you will be see majestic stalactites stones/cone hanging from the roof , stalagmites stone/cone on the floor, and other exquisite drip stone formations. The innermost cavern contains a crystal-clear underground lake, while on the outside, you can throw a coin and make a wish in the wishing well.