The 21st Commonwealth Games came to a close on April 15, 2018 in Gold Coast, Australia, where the Jamaican contingent represented in excellent fashion, firstly by bringing their largest ever contingent, totaling one hundred and ten (110) athletes, that participated in fifteen sports and secondly by earning a record breaking twenty seven (27) medals overall in the event, signalling the highest medal count that Jamaica has ever achieved at the games with as opposed to the Glasgow and Melbourne games where we finished with a total of Twenty Two (22).

Seven gold medals were won this year along with eight silver and ten bronze in track and field, while a lone silver medal won by Alia Atkinson in swimming along with a bronze from our ‘Sunshine Girls’ in netball completes the 27 medals won.

The highlights include Jamaica’s first ever gold medal in a major championship in the Steeple Chase which was won by Aisha Praught- Leer, while Daniel Thomas- Dodd along with Fredric Dacres put up a national record of 19.36m and 68.20m respectively setting both national and games records respectively.

Rounding out the list of gold medal winners are Ronald Levy who participated in the men’s 110m hurdles while Janieve Russell was victorious in the women’s 400m hurdles and Kimberly Williams triumphed in the women’s triple jump while the women’s 4x400m relay team took the top spot. 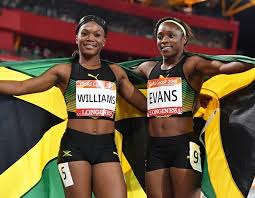