“Pocket Rocket” Shelly-Ann is back

On Saturday June 9th 2018 at the JN Racers Grand Prix Jamaican two time Olympic 100m champion Shelly-Ann “Pocket Rocket” Fraser-Pryce was confirmed by the organizers as one of the athletes that will be competing at the event.

Shelly-Ann is known for winning gold in the 100m event in both the 2008 Beijing and London 2012 Olympic Games. Since giving birth in August of 2017 The Racers Grand Prix will be only her third race.

Fraser-Pryce will face stern opposition as she will be competing against the likes of American 2017 World champion Tori Bowie, as well as Candice Hill, Jenna Prandini and Kelly-Ann Baptiste of Trinidad and Tobago.

A few weeks ago at the Jamaica Athletics Administrative Association (JAAA) All Comers Meet, the thirty one year old Fraser-Pryce opened her season in the best way possible with a 11.53sec finish in the 100m final gaining her a win, quickly followed by 11.33secs recently at the Cayman Invitational which this time was only good for second place, behind Prandini who finished with 11.16secs.

“We won’t always win but as long as you line up to compete, don’t stop trying. Even when they are younger than you are,” Fraser-Pryce tweeted. 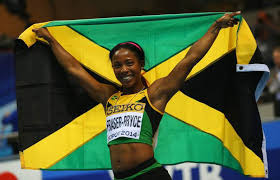 At the age of twenty one years old Shelly Ann became the first woman in the Caribbean to successfully secure an Olympic gold medal in the 100m event and go on to defend the title; which is what Fraser-Pryce achieved in 2008 and 2012 respectively. On the global stage, only three women in the history of athletics have won two consecutive Olympic 100m titles, however the three peat was not achieved in 2016 when Fraser-Pryce saw her season blighted by injuries, although she did finish with an Olympic 100m bronze that year.

“Pocket Rocket” Shelly-Ann is back